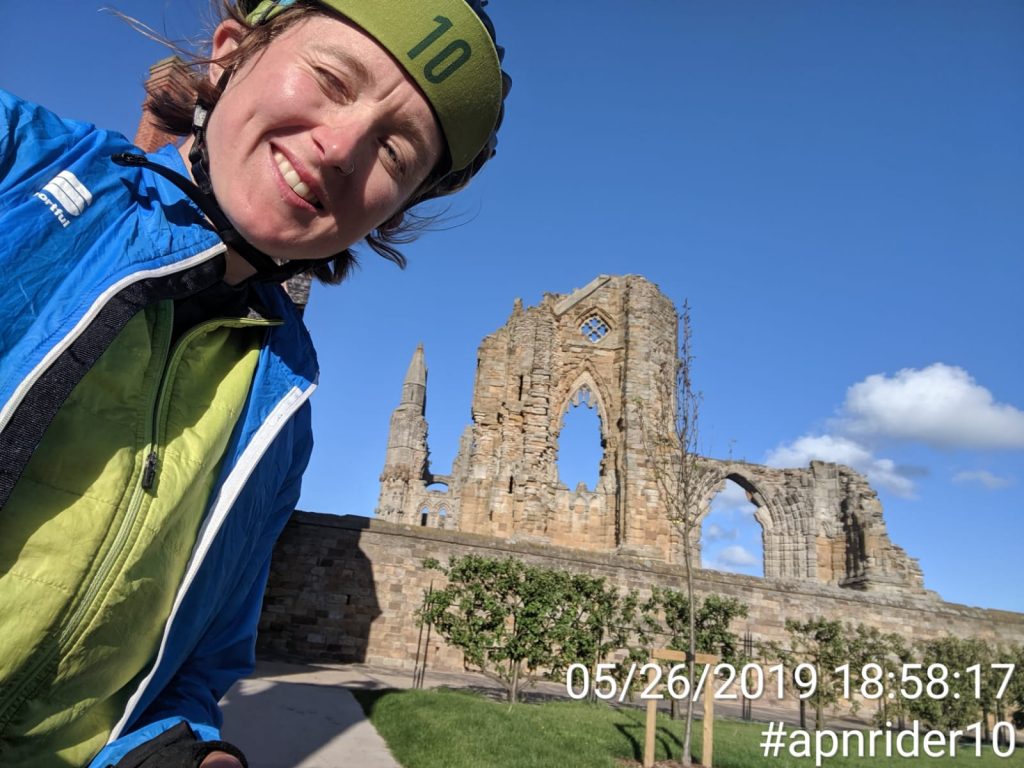 I finished All Points North yesterday. A ~530 mile free route starting and finishing in #sheffield. My body is more broken now than it was after the Transcontinental Race.

What an awesome event though.

We all (70 riders) set off from Sheffield at 8pm Friday. Within 40 miles I was on my own and in the dark country lanes of the Dales. I’m rubbish at riding through the night so not long after that – after feeling myself swerving off the road as my eyes were closing – I scanned the roadside for a ‘bed’. Found one. A surprisingly comfy patch of gravel under a brick alcove. Or maybe I was just that tired that it seemed comfy.

Ticked off a few easy control points, then came a couple of killers – Tan Hill Inn and Great Dun Fell. Lots of climbing, lots of steep, lots of rain, no visibility, and almost no front brake pads afterwards.

I was uncontrollably shivering after the Dun Fell descent and rang around to see if I could get a bed for the night. I didn’t fancy a cold wet bivvy and figured I’d perform better after getting warm. Obviously I couldn’t find one, it was bank holiday. I aimed for a hot meal as a second best option, and found one in a pub about 10 miles further on. The owners were friendly and asked me where I was going and where I would sleep.

“Probably a bus stop.”
“You can’t sleep in a bus stop!”
“It’s OK. I slept in a pile of gravel last night.”
“No! You can sleep on the sofa in that room until we close.”

Wow. So they put me in the empty room (with a fire!), brought me a blanket, turned the lights off and for the next hour and a half I melted into the sofa.

I love how surprises like this come along. A couple of hours before was a low point, cold and shivering at the bottom of Great Dun Fell, wondering what to do. Then I found some really kind strangers who did something nice for me. Time and again on these rides I learn that the common solution is just to keep moving. It’s shit weather – keep moving, you’ll move to some place where the weather’s different eventually. You’re bored – keep moving, you’ll bump into someone or see something that entertains you. Plus, until you find the thing that changes your situation for the better, you’ll at least be chipping away at your distance left to cover.

After that, a mega blunder.

I wanted another two hours’ sleep so did end up bivvying in a bus stop after all. It was 11pm so I set my alarm for what I thought was 1am. I woke up to daylight though. Not 1am. I’d accidentally set my alarm for 1pm and slept right through to 5am. And it was raining again now.

It was difficult to get over my stupid mistake. But I reckon I wouldn’t have finished any faster had I woken up earlier. I did most of the final 300 miles with plenty of energy, and only stopped for one more 30 minute sleep break close to the end when the night riding got to me again.

So many great performances. I don’t know how Pawel Pulawski (1st in) did it on one hour of sleep. That’s insane.

Thank you to Laani of @elementsbodywork for making my legs feel normal again with the sports massage, and all of the sponsors who donated something:

And of course to @allpointsnorth.cc for all the time invested and the great organisation. I can’t wait to see the control points for next year.

This website uses cookies to improve your experience while you navigate through the website. Out of these, the cookies that are categorized as necessary are stored on your browser as they are essential for the working of basic functionalities of the website. We also use third-party cookies that help us analyze and understand how you use this website. These cookies will be stored in your browser only with your consent. You also have the option to opt-out of these cookies. But opting out of some of these cookies may affect your browsing experience.
Necessary Always Enabled
Necessary cookies are absolutely essential for the website to function properly. This category only includes cookies that ensures basic functionalities and security features of the website. These cookies do not store any personal information.
Non-necessary
Any cookies that may not be particularly necessary for the website to function and is used specifically to collect user personal data via analytics, ads, other embedded contents are termed as non-necessary cookies. It is mandatory to procure user consent prior to running these cookies on your website.
SAVE & ACCEPT